WATCH
Thanks to Fifth Wall Radio
for their support !

All Songs Copyright 2016.
All Rights Reserved.

Alfa Valova is an experimental, ethno-jazz ensemble and the brainchild of Santa Fe-based composer Eric Heithaus. The project draws from a wide array of textures and modalities,working with members of the Santa Fe Symphony and other local musicians from diverse backgrounds to achieve their rich and unique sound. Through this eclectic soundscape, the story of an alternate universe where music is the key to happiness unfolds: the story of a tiny planet called Alfa Valova.

Releasing their debut, self-titled album in 2016, Alfa Valova’s music explores a fantastical sci-fi narrative wherein the gift of music has been taken for granted by the Valovians of the Sunflower Galaxy, leaving them music-less and ill. It is up to the story’s protagonist, Scout Sunshine, to create the new music that will heal his home planet. Using a mix of traditional Western classical, jazz and rock instrumentation alongside various world instruments such as the Bouzouki, Udu and Oud, each of the album’s 14 tracks adds a new dimension to the whimsical narrative. The debut features original artwork by surrealist painter Michael Cheval with his painting “Melody of Rain” which inspired the song of the same name. The project is currently in the studio recording for a follow-up release that will continue to shape and explore the Alfa Valova landscape.

Eric Heithaus, Alfa Valova’s composer, has been a professional recording engineer, musician and producer for 33 years. 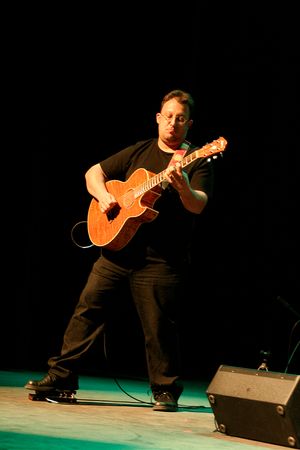 He first fell in love with music as a child listening to his “The Wizard of Oz” LP and by high school was playing in bands, DJing for a local radio station KTRC and apprenticing as an audio engineer at Summit Recording Studio in Tucson, AZ where he’d later become manager. In 2005, Heithaus branched out into video production, earning him an AMC national award for best music video. Alfa Valova’s song “Canyon Thunderstorm Followed By a "Drive Into Town to Meet With Whales” is featured in the award winning documentary “Veiled Lighting.” When Heithaus isn’t in his studio, "Santa Fe Music Videos" he can be found volunteering at local homeless shelters with his wife Amy.